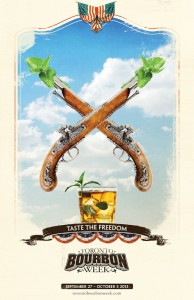 Fingers and Bones at the Indie Alehouse: a unique pairing of bourbon (the fingers) with ribs (the bones).  With the ticket price you get a flight of two bourbons, a flight of three of Indie’s in-house beers, plus your choice of two plates of beef ribs, back ribs or chicken wings.  SOLD OUT!

The Hillbilly Whisperer at Amsterdam BrewHouse: a unique pairing of bourbon alongside a pint of Kentucky Common, a now-rare beer style from Kentucky brewed exclusively for Toronto Bourbon Week, alongside a series of food items created for the week.  No tickets required!

The Bourbon Brunch at Acadia Restaurant (11:30AM): the only daytime event during week will be a family-style brunch paired with two original, in-house kegged bourbon cocktails (one carbonated, one still), exclusive to the brunch.  SOLD OUT!

Classics from the Old School at the Monarch Tavern (doors 6PM): one of Toronto’s most old school bars hosts a night of classic bourbon cocktails, including such favourites as the Old Fashioned, the Manhattan and the Mint Julep.  Your ticket gets you three full-size cocktails from a specially curated bourbon cocktail menu.  SOLD OUT! A limited number of tickets will be available at the door.

The Bourbon Mix at Ursa (10PM-2AM): Buffalo Trace and Ridgemont 1792 are the featured bourbons in an eight bartender mixology competition, judged by Christine Sismondo (author of “America Walks into a Bar”), Sandy De Almeida (Churchill, The Drake Hotel, Toronto) and two special guests from NYC. No tickets required!

The Bourbon Derby at 3030 Dundas West (6PM / 10PM): our closing night event where you can choose three bourbons from a field of 20 available, along with tutored discussion from native Kentuckian and 3030 bartender Lucas Twyman, and live bluegrass from The Barrel Boys.  Tasting sold out, but general admission with no cover for the band beginning at 10PM.